My brother Alan died on January 6, six days before his 67th birthday. I was very fond of him.

In my mother's memoir, she wrote how as a young child Alan cleverly avoided sharing his new coloring book and new box of crayons. He showed them to a neighbor girl his age, who said,
"I love to color!"
"I love to color, too," Alan responded.
"Why don't we color in your new book?" she asked.
Alan retorted quickly, "Oh, I love to color, but only in the afternoons."

Alan's clever sense of humor helped him make friends effortlessly wherever he went. He loved nature and the outdoors, and was always the most outgoing and adventurous member of the family. He learned to swim by the time he was six and as a teenager he brought home snakes he had captured. 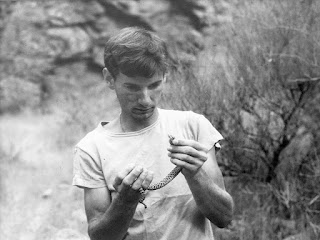 In his teens, Alan joined a spelunking group in exploring some middle Tennessee caves. He was my guide as the two of us crawled through one of the caves the group had visited. Later, when Jeanne and I were living in Tacoma Washington while I was stationed there in the Army, Alan and two of his friends hitchhiked from Nashville to visit us for a few days. Years later he got his pilot's license and took Jeanne and me for a short flight over Nashville.

The biggest adventure I shared with Alan was a long road trip. When I was a senior in high school, I bought my first car, a used Volkswagen beetle. I enjoyed driving it out in the country, and decided to do some exploring with it the summer after I graduated. I planned a camping trip out west, and Alan enthusiastically agreed to go with me. He was 14 at the time, so I did all the driving, but he helped to plan the trip and navigate on the road.

The first night of our trip we pitched our tent in a campground in Ouachita National Forest in Arkansas. Our next day took us to visit our father's family in northeast Texas. There, our uncle who co-owned a car dealership put our little car up on a lift and checked it out for our trip. "Your Dad let you start out on this trip with those worn tires?" he exclaimed. We didn't have money for new tires, so we went on with the worn ones.

As we were driving along a highway across north Texas, we were stopped by a Texas Ranger. He looked at my license and leaned over to look at Alan. "Aren't you a little young to be so far from home?" he asked. We assured him that we weren't running away from home, and he sent us on our way with a reminder to drive carefully.

After a night with our uncle and aunt in Lubbock, we headed north to Capulin Volcano National Monument in New Mexico, then up into Colorado. We walked across the suspension bridge at Royal Gorge and drove through Garden of the Gods in Colorado Springs before continuing north toward Rocky Mountain National Park.

In a lakeside campground on the eastern slopes of the mountains, Alan got out his fishing rod, caught a few trout in the lake, cleaned them, and cooked them over the fire for dinner. The next morning as we negotiated the switchbacks on a winding road up into the mountains, I had to pull over so he could leave his fish dinner beside the road.

Our next destination was Grand Canyon National Park. We first took in the sights from the North Rim, then drove the 200 miles around to the South Rim. There, we hiked the South Kaibab Trail down to the river, then up the Bright Angel Trail, camping for the night at Indian Garden Campground. We didn't carry a tent; we just spread our sleeping bags on picnic tables to avoid snakes.

From Grand Canyon, we headed east into New Mexico, where we visited White Sands National Monument and Carlsbad Cavern National Park, then south into Texas to Big Bend National Park, where we saw Santa Elena Canyon and Boquillas Canyon.

Our final destination was Edinburg Texas, where we visited some of the close friends we had left behind when we moved to Tennessee four years earlier. Finally, we headed home to Nashville, having driven more than 6000 miles over a period of five weeks. During that time we had not called home or even sent any postcards. The only information our parents had on our progress was from letters written by our relatives and friends in Texas.

Alan worked as an electrician for many years. He didn't mind the early morning drive to construction sites or the strenuous outdoor work in winter or summer. Later he enjoyed working in a commercial greenhouse.

He shared his love of nature and the outdoors with his three children. He took them fishing and taught them about the birds and the other small wildlife in their neighborhood. He often took them to Radnor Lake State Natural Area on the south side of Nashville to hike and observe the wildlife there.


Once my Dad was discussing ways to discourage the racoons from raiding his garden to eat his corn. When my son Benjamin suggested a tape of high frequency sound, my Dad wondered if a radio playing rock music might repel them. Alan was skeptical. His response to the idea was, "Oh, they'll like having dinner music."

That comment was typical of Alan. I can still hear his quiet voice making a wry remark like that, with an amused smile. I will miss him.