On the Outside: my personal, non-Christian relationship with God (my story part 5)

Our opinions, gently nudged by circumstance, revise themselves under cover of inattention. We tell them in a steady voice, No, I'm not interested in a change at present. But there is no stopping opinions. They don't care about whether we want to hold them or not; they do what they have to do. – Nicholson Baker, The Size of Thoughts

In church the next Sunday, the speaker was discussing issues related to the Christian life as a form of evangelism.   I suddenly found that I no longer had any interest in evangelism.   I wanted to tell people about the freedom I had found in self-responsibility, not about how Jesus had atoned for my sins.  It struck me that my new-found freedom had nothing to do with Christianity, and furthermore that my half century of Christian training had been a barrier to reaching it.   I realized that it was Christianity that had hidden the reality of my responsibility from me all these years, by teaching that what I needed to do was find God's will for my life.  I recognized that the church and Christianity had not met my needs, and that they had no gospel ("good news") for me.   The freedom I had found hadn't come from meeting Jesus, so I felt no desire to bring other people to Jesus.  To my astonishment, I found that I had no reason to be a Christian, and that I in fact wasn't one.

As I thought about this, I remembered the teachings I've heard that we can't count on God to do any particular thing, and it occurred to me that that means we can't actually count on him for anything, which means there is no gospel and we have no basis for faith in Christ.  Without faith as an answer to all the nagging questions I had accumulated over the years, the whole edifice of my religion collapsed in ruins.  Suddenly I found myself outside the church, and it felt very strange, but to my great surprise, it wasn't scary.  In fact it felt good!   I looked back on my life amazed that I had remained a Christian so long.

I found myself with a somewhat deistic world view, but different from classical deism in that I still believed very strongly in an immanent God.  Rather than denying the possibility of miracles, I still believed (as I described earlier) that everything is equally under God's control, and that he sometimes does things that surprise us.  With God in complete control, it seemed to me that the world is the way God wants it—not "fallen." 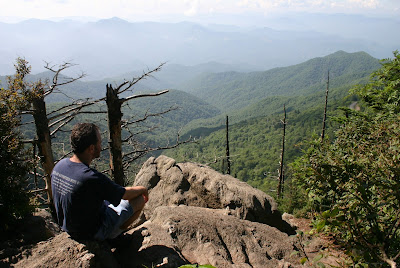 This series of posts tells the story of how I went free of religion:
Part 1  God in a Box:  my fundamentalist Christian youth
Part 2  Out of the Box:  my charismatic, ecumenical experience
Part 3  On the Edge:  my own version of Christianity
Part 4  Going Free:  my acceptance of responsibility
Part 5  On the Outside:  my personal, non-Christian relationship with God
Part 6  In the Real World:  my naturalistic world view
Posted by Joel at 12:53 PM

Email ThisBlogThis!Share to TwitterShare to FacebookShare to Pinterest
Labels: leaving religion, my story